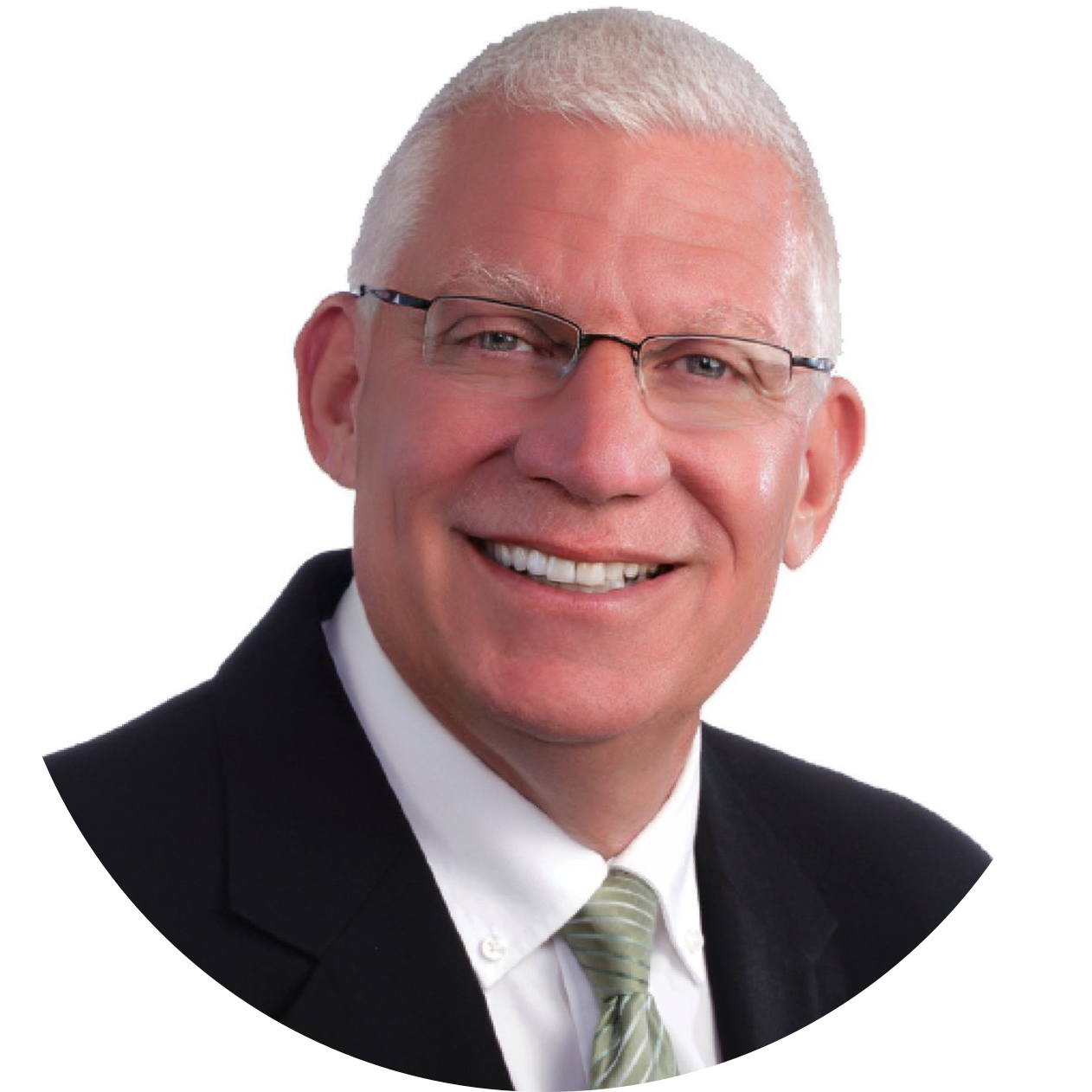 “Robb Tadelman is a colleague in Law Enforcement and a great candidate for
Sheriff. His qualifications, his integrity and his empathy for people and
the issues they face are all attributes that a Sheriff should possess.” 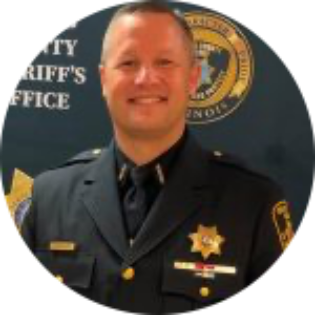 “Robb Tadelman and I share a similar career path in that we both worked for great Sheriff’s who became mentors. This means that when you become undersheriff you are appointed by the Sheriff who mentored you and has confidence in your ability to run the office. Robb’s experience and his integrity make him the most qualified candidate in the race.”

“Boone and McHenry counties not only share a border but our Sheriff’s Offices share the same values and beliefs in keeping our communities safe. Over the years, I have gotten to know Robb Tadelman and have come to find him to be a leader and the kind of person who would make a great Sheriff. I look forward to working with Robb and our continued partnership with McHenry County.” 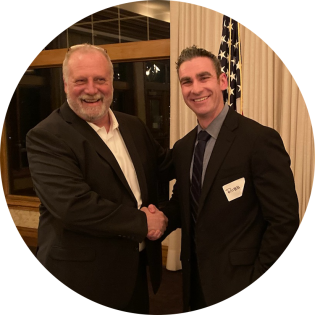 “Robb Tadelman has excelled at every position he has held during his career at the sheriff’s office and is someone I can rely on daily. With his experience, strong work ethic and dedication I know he will be the kind of sheriff the county can depend on.” 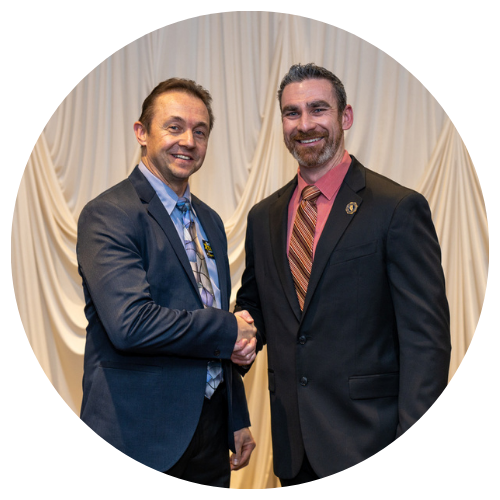 “I proudly endorse Robb Tadelman for McHenry County Sheriff. On the occasions I have worked with him, Robb has displayed the utmost in professionalism and sincerity. He is unsurpassed in his commitment to the citizens of McHenry County and the betterment of law enforcement.” 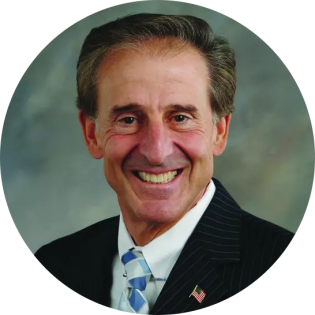 “It is important for the citizens of McHenry County to have another strong Sheriff who is hard-working, dedicated, and focused on keeping our community a secure and safe place to raise a family. That person is Robb Tadelman.” 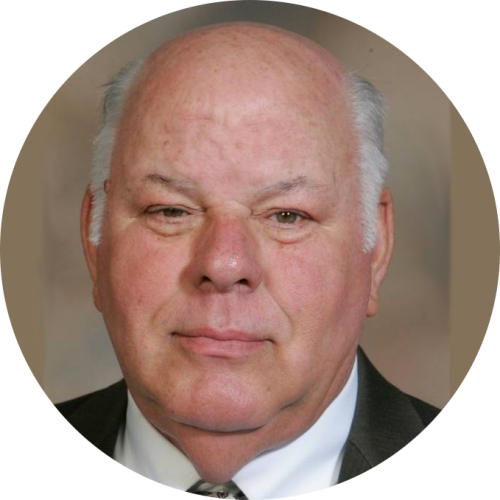 “When I was first elected as County Auditor, the Sheriff’s Office had 4 cars and 12 employees. Today, it has 500 employees. This is not a place for on-the-job training. The sheriff’s office has grown into a sophisticated department. Robb has the experience and the training to do the job on day one.” 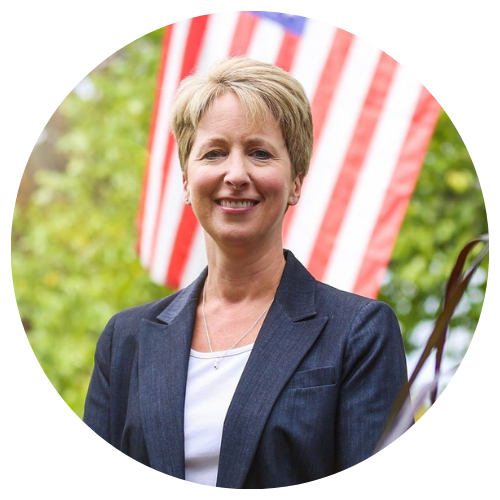 “I have worked with all our McHenry County police agencies during my 34 years in the Circuit Clerk’s office.  I know the importance of Robb’s 18 years of full-time experience with the largest police agency in McHenry County, and how this compares to part-time work with smaller agencies. Robb’s experience and dedication make him the most qualified candidate to lead the Sheriff’s Office into the future.” 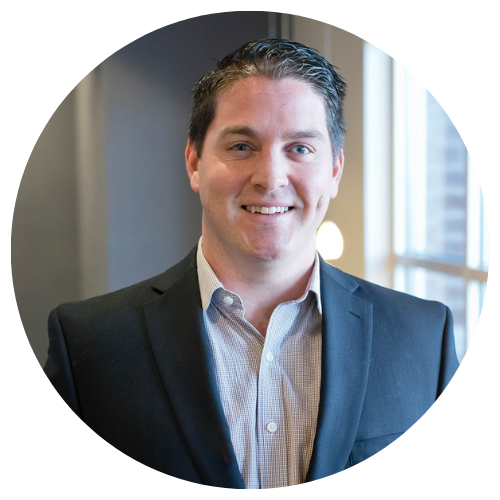 “I wholeheartedly endorse Robb Tadelman for McHenry County Sheriff because he has unparalleled experience, integrity, and knowledge of running a large police agency. My family and my business are here in McHenry County, and it’s important to me that we elect someone who can continue keeping this county safe. Robb is the person to do that.” 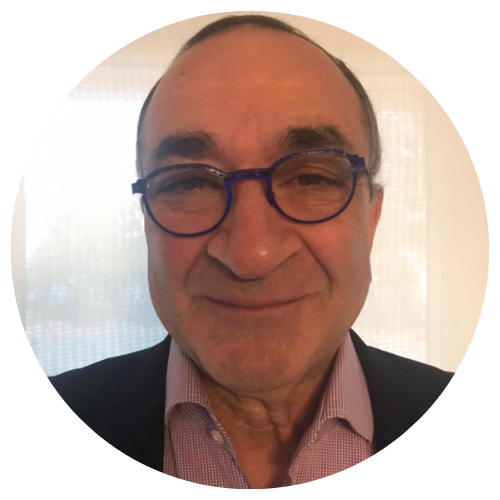 “I endorse Robb Tadelman for a host of reasons. Robb is an experienced leader in his various positions in the McHenry County Sheriff’s Department. He is fair, knowledgeable, passionate, compassionate and always giving back to our communities, ethical beyond reproach, approachable, reasonable, and all around good man. Without question I wholeheartedly endorse Robb Tadelman as McHenry County’s next Sheriff.” 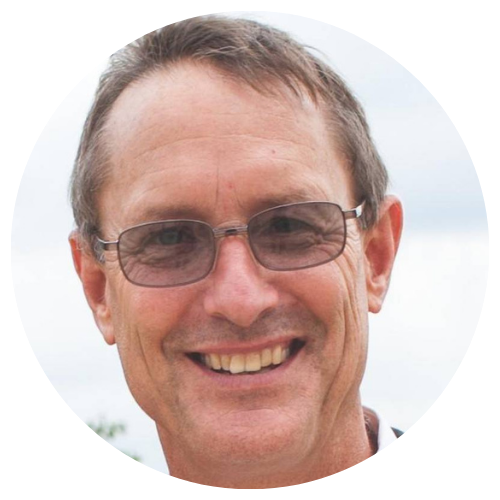 “I have worked for the Sheriff’s Office for 31 years. During that time I have gotten to know Robb Tadelman. He is a Fair and Exceptional leader who serves McHenry County with distinction.” 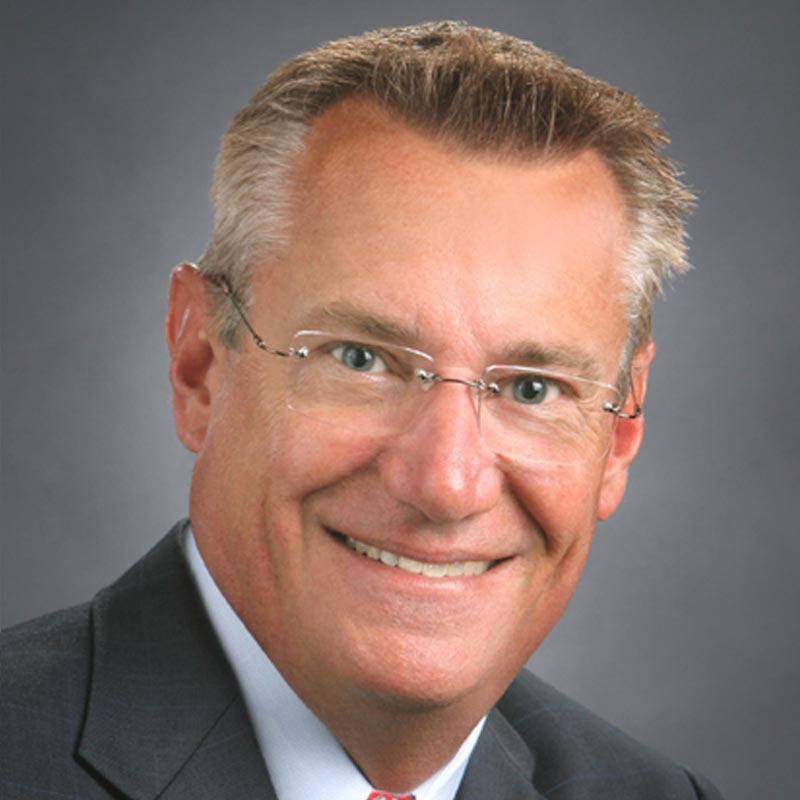 “Robb Tadelman has my full support to be the next Sheriff of McHenry County. Robb has 18 years of dedicated experience to law enforcement. His current role of Undersheriff gives him the unique perspective of running a large law enforcement agency. His morals, integrity, and commitment to the community, combined with such extensive experience, make him the candidate most qualified to serve in such an important role.” 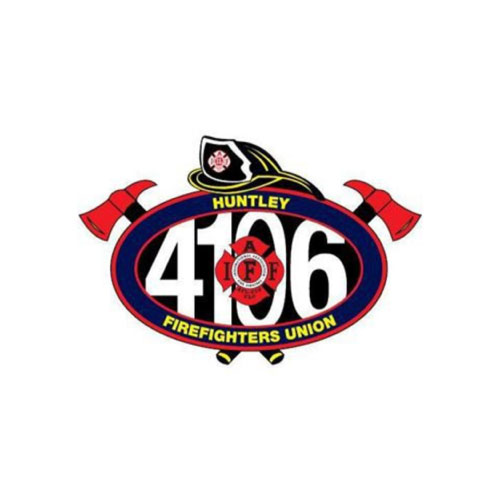 “The Huntley Fire Union 4106 takes great pride in supporting Robb Tadelman for Sheriff of McHenry County. We, as a fire protection district, are aware of the threats to public safety personnel across the United States and Huntley is no exception. Approximately 10 years ago, Huntley Fire protection District partnered with the McHenry County multiagency SWAT team, to provide Tactical Emergency Medical Services Medics, (TEMS Medics). This partnership allowed us to collaborate with Robb Tadelman to provide this service across McHenry County. Robb knows the importance of collaboration, not only with other law enforcement agencies in McHenry County but fire departments and other public agencies. Due to Robb’s leadership, on-going commitment to public safety and Robb’s efforts to collaborate with us and other public agencies we, the Huntley Fire Union 4106, proudly support Robb Tadelman for McHenry County Sheriff. ” 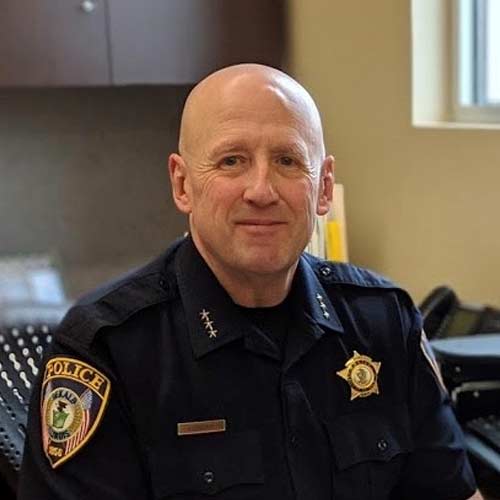 “I was fortunate to have been involved in the process that hired Robb as a Deputy Sheriff. I also attended his graduation and met his family. From the beginning it was clear that Robb was a man of character and that he would serve McHenry County in an exemplary manner.

Robb is without question the best person to ever run as a candidate for Sheriff of McHenry County. His commitment to his family, faith, and service are second to none. It is without hesitation that I support Robb for Sheriff, he will serve McHenry County in a professional manner, that embraces genuine care and concern for everyone’s wellbeing. I am extremely proud of Robb and was honored to have served with him.” 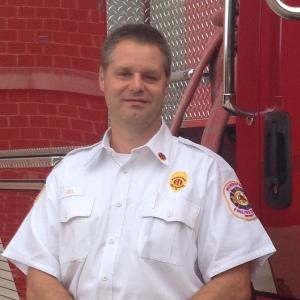 “With the prevalence of increasingly complex incidents facing today’s society, including active violence events, it is critical that law enforcement maintains close relations and interoperability with local first responders such as fire/rescue and EMS. Robb Tadelman understands this need for inter-agency cooperation and has been a champion of interoperability throughout McHenry County. Having worked closely with Robb both personally and professionally, I am proud to endorse him for McHenry County Sheriff.” 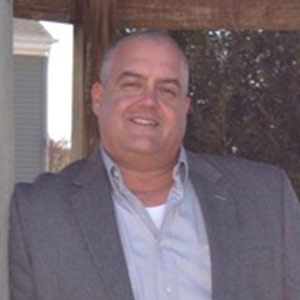 “I have known Robb for his entire career. I was one of his field training officers, and I believe his first of two. From early on, I knew that Robb was going to have a special career. He advanced quickly in the Department due to his work ethic and knowledge. Without question, Robb is one of a handful of officers that I have worked with that I would consider to be one of the smartest police officers I know. During the time I have known him, he has shown himself to be dependable and honest, holding himself to high moral standards. This is evidenced in the election as I often get asked who I am supporting for Sheriff. Without hesitation, I am supporting Robb Tadelman for McHenry County Sheriff.” 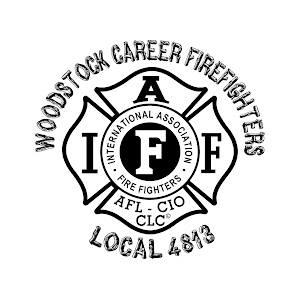 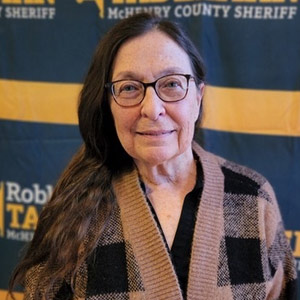 “I am pleased to endorse Robb Tadelman to be our next McHenry County Sheriff. Robb’s long history of public service and involvement in our county has given him the experience and commitment necessary for the job, as well as a clear understanding of what it means to be responsible for the public trust. Based on his exemplary record of public service, McHenry County voters can count on having Robb’s full-time commitment to serve and protect our county and all of its residents.” 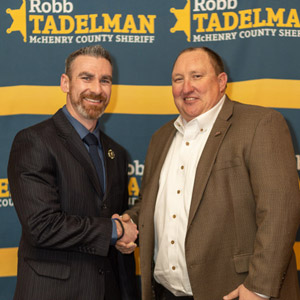 “As the mayor of Huntley, I understand the importance of electing a Sheriff with the experience necessary for the position. Robb Tadelman has dedicated his entire career to serving McHenry County through his 18 years working in the Sheriff’s office. We need leaders like him who will help move this county forward while maintaining the safety we are all fortunate enough to enjoy. Robb represents everything that is great about our county. Robb is committed to law enforcement and McHenry County, and I know he’s ready to be the next Sheriff.”